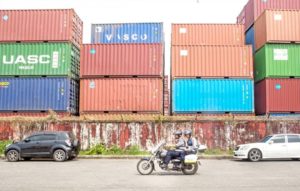 The Ministry of Commerce (MOC) is drafting new trade laws to safeguard local producers while promoting exports of domestically-produced goods.

Due to the lack of investments and technology, Myanmar producers face stiff competition from their regional peers, who are able to manufacture at faster speeds and lower costs and produce higher quality goods.

As such, the legislation, drafted in collaboration with the World Bank and German development agency GIZ, will include a new Safeguard Law on Increased Import and Antidumping and Countervailing Law. The laws aim to safeguard domestic manufacturers from cheap imports and support demand for locally-made products.

At the same time, the government is also raising efforts to promote economic growth through exports by adding new priority sectors to its National Export Strategy (NES).

Gems and jewellery, the digital economy, fruits and vegetables, agricultural product-based food products and industrial art products have been added to the NES 2020-2025, which replaces the first NES 2014-2019, according to the MOC.

Notably, the new sectors appear to involve higher value-add and selected across a wider spectrum of industries compared to the current NES, which prioritises raw commodities including rice, pulses, oilseed crops, marine products, textile and garments and wood and wood products.

In the first six months of this financial year, the country’s export earnings totaled some US$8 billion, which is up by more than US$650 million from the same period last year, buoyed by overseas demand for locally produced garments and despite lower exports of rice, beans and pulses.

Meanwhile, spending on imports rose to US$8.9 billion during the same period, resulting in a trade deficit of more than US$100 million, according to data from the MOC.