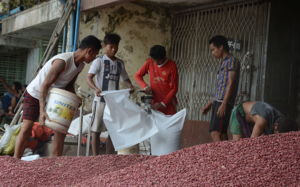 India government has granted permission to import 400,000 tonnes of mung bean from Myanmar in the next fiscal of 2020-2021.

With permission to import 400,000 tonnes of mung beans in the next fiscal, it is likely that there will emerge a good beans market for the local farmers in the next beans season. After the announcements, the mung bean price goes up for a reasonable percentage in the market. Now, the price of the mung bean is K950,000 per tonne.

Myanmar embassy in New Delhi, India announced that India granted to import 400,000 tonnes of mung beans from Myanmar in 2020-2021FY, which have been restricted as import commodity since 2017 by the Indian central government according to 2015-2020 foreign trade policy.

On 17 March 2020, the India Ministry of Commerce and Industry announced that this restriction is not really concerned with the bilateral Memorandum of Understanding (MoU). Additionally, India has permitted to import 250,000 tonnes of mung beans from Myanmar, extended its deadline to the end of April for 2019-2020 FY, under the permission of the Directorate General of Foreign Trade (DGFT) on 3 March.

On 19 March, the directorate also announced that the import of 400,000 tonnes of mung beans, allowed for the 2020-2021FY, will be undertaken from 1 May 2020 to 31 March 2021. The local bean mills and bean cleansing businessmen are required to apply for the quota through the directorate Website from 20 to 31 March. The beans exporting companies have to export paper writing help the beans to India not later than 31 March 2021 as there will no longer be an extension of the import of the mung beans.