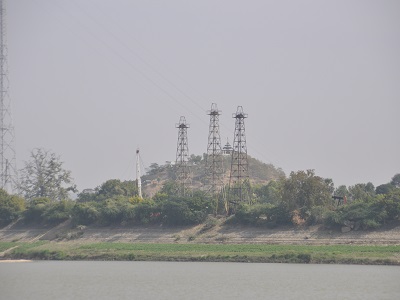 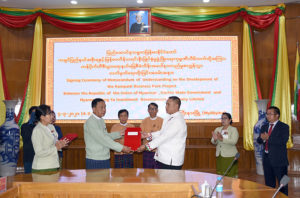 The Kachin State Government and Myanmar Heng Ya Investment Development Co. Ltd signed a Memorandum of Understanding for developing the Kampaiti Business Park.

The Kampaiti gate is one of the border checkpoints between Myanmar and China. A proposal to upgrade the border gate was approved by the Kachin State government at the second state meeting’s 18th regular session. The Myanmar Heng Ya Development Company is a joint venture between Kampaiti Development Company and the Yunnan-Teng Yin Trading Company.

At an estimated cost of US$22.4 million (31.85 billion kyats), the Kanpiketi Business Park will cover nearly 70 acres (28 hectares) in the border town in northern Kachin State’s Special Region 1. The area is controlled by the New Democratic Army-Kachin (NDAK) militia, which is allied with the Myanmar military.

The business park project includes plans to construct a South Asia-Southeast Asia Culture Park (Zone A) on 12.65 acres, two Trade and Logistics Zones (Zones B and D) on 8.8 acres and 12.7 acres, a Border Inspection Gate (Zone C) on 5.1 acres and a Business Shop (Zone E) on 1.65 acres.

The joint venture company will implement Zone C first. It will include a border inspection gate, government staff housing, a waiting area and related facilities. The company plans to invite other investors to construct the other zones.

Between 1 October and 21 February of the current financial year, Sino-Myanmar trade at Kampaiti gate soared to US$141.24 million from $73.97 million in the year-ago period, according to data released by the Commerce Ministry.

Companies will engage in CMP garment and bag making businesses in industrial zones in the Yangon Region including Thilawa Special Economic Zone by investing nearly US$24 million.

The Myanmar Project Bank is an interactive web-based platform designed to highlight investment projects in line with the implementation of the Myanmar Sustainable Development Plan (MSDP) for 2018-2030. It can be found on www.projectbank.gov.mm.

The project bank represents “an online one-stop-shop, where all information on projects designed to implement the MSDP can be easily accessed with a single click,” according to the website.

It also establishes a reliable and transparent system which links major investment projects with appropriate sources of finance including Public – Private – Partnerships and provides more opportunities for the private sector to contribute to national development.

All the projects are strategic in nature and align with the MSDP.

The Myanmar Garment Manufacturers Association (MGMA) said that half the garment factories in the country may have to shut down temporarily as soon as March, due to a shortage of raw materials from China.

Some 90 percent of the raw materials such as fabrics, textiles, and zips used by garment factories in Myanmar come from China, and supplies have been curtailed due to the coronavirus outbreak in China.

There are some 500 garment factories in Yangon Region. Of the total, 263 are Chinese-owned, 67 South Korean, and 92 local. The factories employ an estimated 500,000 workers.

Raw materials for the factories are imported from China by sea as well as across the border, but both routes have stopped flowing. Under the circumstances, garment factories run by South  Korean companies may stop operating in early March. Without any improvement in the situation, the stoppage may continue till the end of April.

It may take up to a month to obtain raw materials even when the situation returns to normal, and then Myanmar will still have compete with countries like Vietnam and Cambodia to buy the materials.

Industrial zone in Kyaukphyu SEZ to be built at $30m

An industrial zone project within the Kyaukphyu Special Economic Zone (SEZ) in Rakhine State will be developed for US$30 billion.

CITIC Consortium from China owns 51 percent of the industrial zone while the Myanmar government owns 49pc. The industrial zone will be developed on 2400 acres of land and a high-end housing project will also be constructed across 1235 acres.

The Kyaukphyu SEZ, which is expected to consist of the industrial zone and a deep sea port, will be developed across 4300 acres of land in total.

Myanmar will hold a 30pc stake in the SEZ, which will be developed in phases, while CITIC Consortium will invest 70pc.

Negotiations are now being held to start implementation of the first phase at $1.3 billion. This follows a concession agreement and shareholders’ agreement for the deep-sea port between the two countries during President Xi Jinping’s visit to Nay Pyi Taw last month.

Tenders will be called to carry out social and environmental assessments and geological surveys as part of the development process. Development of the Kyaukphyu port will enhance China’s presence in the Indian Ocean, allowing its oil imports to bypass the Strait of Malacca.

The SEZ is an important asset in the China-Myanmar Economic Corridor, which is part of China’s Belt and Road Initiative, which spans several countries in Asia. It will also be an important connecting point for the high-speed Kunming-Muse-Mandalay-Kyaukphyu railway project.

The company confirmed that it had found a gas column of around 18 meters at its Mahar-1 exploration well after it began exploratory undersea drilling in Block A3 last month.

The discovery was made more than 2,500 meters into the seabed and could yield about 38 million cubic feet of natural gas per day, the Korea Herald has reported.

Posco International was also quoted as saying that it plans to drill a couple of appraisal wells at the site from 2021 and development plans for the field will be established 2-3 years later.

The Shwe natural gas project consists of Blocks A1 and A3. There are currently two existing gas fields – Shwe and Shwe Phyu – at A1. Up until Posco International’s Mahar-1 discovery, there was only one gas field – Mya – in A3.

Shwe is a 35-year project with a remaining 29-year term. Commercial drillings have already started in A1, and will commence at the Mya gas field in A3 in 2025.

A state-owned Chinese firm has expressed interest to invest in the planned Dawei Special Economic Zone (SEZ) in Tanintharyi Region.

Meanwhile, the Myanmar government will increase pressure on ITD as well as the Japan and Thai governments to kick start development at the Dawei SEZ. After years of delays and negotiations, changes have been made to the contractual arrangements with ITD for the development of initial industrial estate.

ITD has also been given until March 27 to reply to a final draft Land Lease Agreement prepared by the government. ITD will be given a period of five years to develop nine projects across 700 hectares of land at the SEZ.

The Thai government has agreed to provide a loan to complete construction of a two-lane highway connecting Dawei SEZ to the Myanmar-Thailand border. Construction on the 138-kilometre road actually began in 2018, after the Ministry of Natural Resources and Environmental Conservation approved the environmental and social impact assessment.

The Dawei SEZ project was first announced in 2008 but failed to start when ITD ran short of funds, leading to arrangements to develop the SEZ in two phases. The projects to be developed by ITD in the initial phase include a deep sea port, industrial estate and supporting infrastructure such as a power plant and liquefied natural gas terminal.

The project has also been delayed due to the lack of suitable infrastructure as well as social and environmental issues relating to the location of the SEZ.  When complete, the SEZ is expected to link the southern part of the Greater Mekong region, which includes Bangkok, Phnom Penh and Hanoi. It will also link Myanmar to India, Africa and Europe.

Inflation  in 2019 peaked at 8.81 percent in December, the highest level in 12 months, according to the latest available data released by the Central Statistical Organisation (CSO). In January 2019, inflation was 6.94pc.

The higher inflation levels are due to steeper electricity tariffs implemented by the government since July last year.

Other reasons include the rising price of food, including rice, oil, meat, vegetables and other basic commodities, which was mainly driven by volatile exchange rates, according to the CSO. That also affected the price of non-food items, mainly fuel, which is imported.

Myanmar’s external competitiveness could also weaken if its inflation rate were to exceed those of its major trading partners over a substantial period, according to the World Bank. 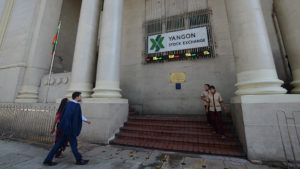 In the month of January, 196,836 shares worth around K1.25 billion were traded on the Yangon Stock Exchange. Currently, shares of five listed companies are being traded on the exchange.

A total of 2.4 million shares worth K13.39 billion were traded on the Yangon Stock Exchange (YSX) in 2019, a significant increase compared to the previous year. The YSX has also sought the government’s support to get more public companies to participate in the stock market and to help more institutional investors, such as financing companies, investment banks, and insurance companies, to emerge. 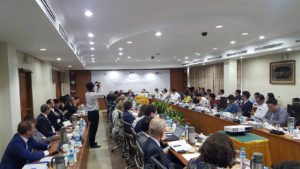 French entrepreneurs met with their Myanmar counterparts at a business matching event organized at the headquarters of the Republic of the Union of Myanmar Federation of Chambers of Commerce and Industry (UMFCCI).

The French businessmen were led by Mr Francois Corbin, President of the French-Myanmar Business Council and ASEAN Committee for MEDEF International. They were accompanied by the French ambassador to Myanmar Mr. Christian Lechervy.

In addition, vice president Dr. Maung Maung Lay spoke about the current economic climate and the investment and trade situation in Myanmar. Entrepreneurs from the two countries discussed potential investments and business opportunities. Between 1988 and December, 2019, 22 enterprises from France have brought in foreign direct investments of over $550 million into Myanmar.